Well, sometimes you just get lucky, but always and everywhere, it pays to ask.

I was looking for a wheelbarrow, because with the new property under contract (more about this later, when time permits), I have had the need to haul things around an acre of land and figured that instead of breaking my back, a good wheelbarrow would make sense.

Contacted a fellow out in Geneseo through Craigslist, who had a nifty, vintage 4 cu. ft. Radio Flyer listed. After speaking to him a bit, he informed me that he and his wife were moving to North Carolina and needed to sell everything, so I asked if he had any other farming or gardening implements.

He replied that he did, and agreed to meet me about half-way, in the parking lot of Dick's Sporting Goods at Marketplace Mall in Henrietta, bringing with him some other, unspecified things he thought might interest me.

After sizing up the wheelbarrow for $25, I figured this was a pretty good deal and started looking through the rest of what he'd brought along. All of it was in excellent condition and high quality, so I just asked, "how much for everything?"

The answer to that question is below the photo and description of what I bought, which, as shown in the photo, was a nice selection of great farm/garden tools. 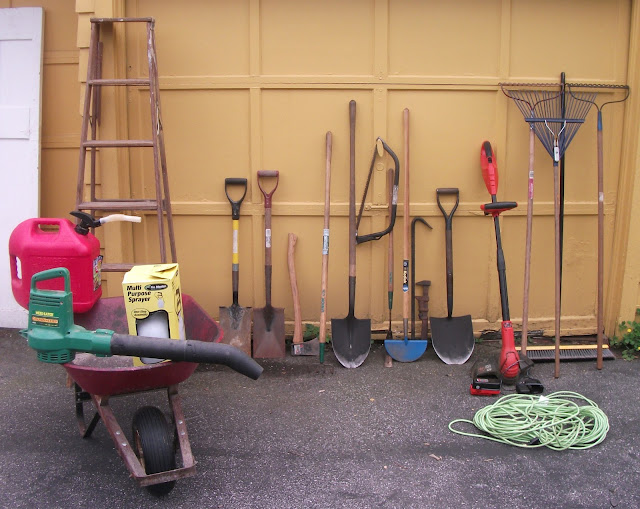 I looked this stuff up on the internet and to buy it all new would be well over $600.

The fellow said everything for fifty-five dollars and I thought about it for maybe a nano-second and said, "deal," whipped out three twenties and handed them to him. He got out his wallet, gave me five back and helped me load it all into my van, and away I went, happy as a kid in a candy shop.

Yep. I'm gonna be a farmer, accidentally, of course.
Posted by Rick at 2:22 PM No comments:

OK, things are beginning to take shape around the old accidental farm. Seeds are either in the mulch, already turned into seedlings or about to be and some (peas) have sprouted from the mulch.

Today and tomorrow the rest of the garden gets planted.

I've updated the Rick's Natural website with a slideshow that outlines my travails trying to buy some property and the progress thus far on the home-farm.

I'm actually a much better coder than the website shows right now, but I've been busy "out in the field," so the site looks a bit sparse right now. I'll be cleaning up the website and adding products (wood ash, all-natural salsa, and eventually, fresh produce) when time allows (sometime this year ;-).
Posted by Rick at 10:28 AM No comments:

NY Farm Workers' Bill Will Be Bad for Consumers

Ever worked on a farm?

One wonders whether the state Assembly and Senate members who are so intent on passing the Farmworkers Fair Labor Practices Act have any idea how demanding, time-constricted and physically-challenging farm work is.

Preparing fields for planting, sowing seeds or starting seedlings in fields, caring for and irrigation and eventually, harvesting crops takes time, supreme effort and exceptional timing. There are times when a field (depending on the size) of crops will need just a few workers, other times when it requires 10 or 100 times that number because Mother Nature just doesn't care about human schedules.

When a crop needs to go into the ground, the time element is a matter of days or weeks. The same is true for harvesting. Many hands are needed to ensure that crops are picked when at the height of their ripeness, a period that can last for a few days to a few weeks. In between planting and harvesting, there isn't much work, because Mother Nature does most of what's necessary, supplying sun, wind and rain in usually unpredictable amounts.

The bill before the legislature is one which is more appropriate for factory or hourly workers. Farm work - especially here in New York where the growing season is short - is very seasonal and sporadic. What should farmers do? Pay migrant workers minimum wage or more throughout the summer to stand idly around while crops grow in their fields?

Imagine what that extra time paid out by farmers would do to their bottom lines. Most small-to-medium-sized farms, which employ less than five full-timers year-round, often including the farmer and his/her spouse, would be put out of business by having unionized, pay-scale workers demanding full-time work regardless of whether there's work to do or not.

These legislators in favor of the bill's passage would be well-advised to talk to a few farmers before taking the plunge into another idiotic, socialistic endeavor that does not comport with the realities of farming, but, on its surface, sounds like a great idea to keep people employed and working. It's not.

When tomatoes are $8 a pound, cucumbers are $4 apiece and half the farms in New York shut down because they cant comply with another stupid mandate from Albany, maybe the legislators will understand why this measure should never even be considered at all. If we're to follow the lead of California - which has a form of such a law on its books - we're sure to follow them down the road to bankruptcy, price inflation and an overtaxed state from which people are fleeing in droves.

California's example should be well-noted. The state is a shambles, with high taxes, high costs and regulation piled atop regulation. New York is following along quite well, though we don't share the kind of weather the Golden State has - one that allows for multiple, long growing seasons for a wide array of crops.

As usual, our lawmakers don't or can't perceive the real costs behind passing their proposed legislation. The only thing guiding them is the usual need to buy more votes for their re-election campaigns, based on the false promises of "fairness" and "equality," all along ignoring the real-world strictures of the farm industry, for both large and small farmers.

Eight dollar a pound tomatoes sounds like a good idea to me. I'll grow and sell dozens in my back yard and make a fortune. Oh, and then the state can come and tax me, too.

What New York farmers and Americans need now is not more regulations, but less. The politicians just don't get it and probably never will.
Posted by Rick at 6:07 AM No comments:

Well, as any good accidental farmer would need, this one's putting in an offer this weekend to buy a piece of property.

Fearless Rick has conducted an extensive search over the past four months and has finally found one that has all the desirable elements: size, price, location, suitability to goals, access to utilities, privacy and peace.

We can't disclose exactly where it is, but can say it's more than ten acres and less then twenty. Updates on the progress of negotiations, acceptance of offer and closing date will be provided as conditions warrant.

In the meantime, Mr. Rick (as an old GF used to call me) is excited and anticipating many seasons of enjoyment. For now, listen to a classic: Canned Heat's Goin' Up the Country.